The countdown is on!

In less than a month, our first group of volunteers will be boarding their planes and landing at our China Care Home in Beijing!

Our two summer volunteer camps, geared to China Care Club members and Chinese adoptees, allow volunteers to join forces with caregivers to dote on the children. While in China, they also learn about Half the Sky’s work and get to enjoy some sightseeing around Beijing too.  Many return with lifelong memories, a renewed commitment to helping institutionalized children, and sometimes even a new perspective on their own identities as adoptees.

Laura, from our 2013 volunteer trip, wrote her college application essay based on her experience:

“In my junior year of high school when I was asked to create a ‘non-representational’ self-portrait, I drew a fortune cookie for two reasons. People think fortune cookies are Asian, but they are really American. They were invented in California in the early 1900s. And the fortune inside the cookie represents fate and luck, both of which played a defining role at the beginning of my life. I was adopted at thirteen months old from an orphanage in China, but American culture is all I have ever known.”

“The summer before my senior year, I, along with ten other adoptees, traveled to Beijing to volunteer at the China Care home, a facility for Chinese orphans with special needs. We were just about to take a tour of the home when a five-year old boy came running up yelling “Jiejie! Jiejie! Baowo!” (“Sister! Sister! Pick me up!”). He stood surveying us and pointing to which “jiejies” he wanted. He told us his name was LongWei, and he tried to convince us he was eight years old. He was at China Care because he has fused fingers and toes. I instantly fell in love with this energetic little boy.” 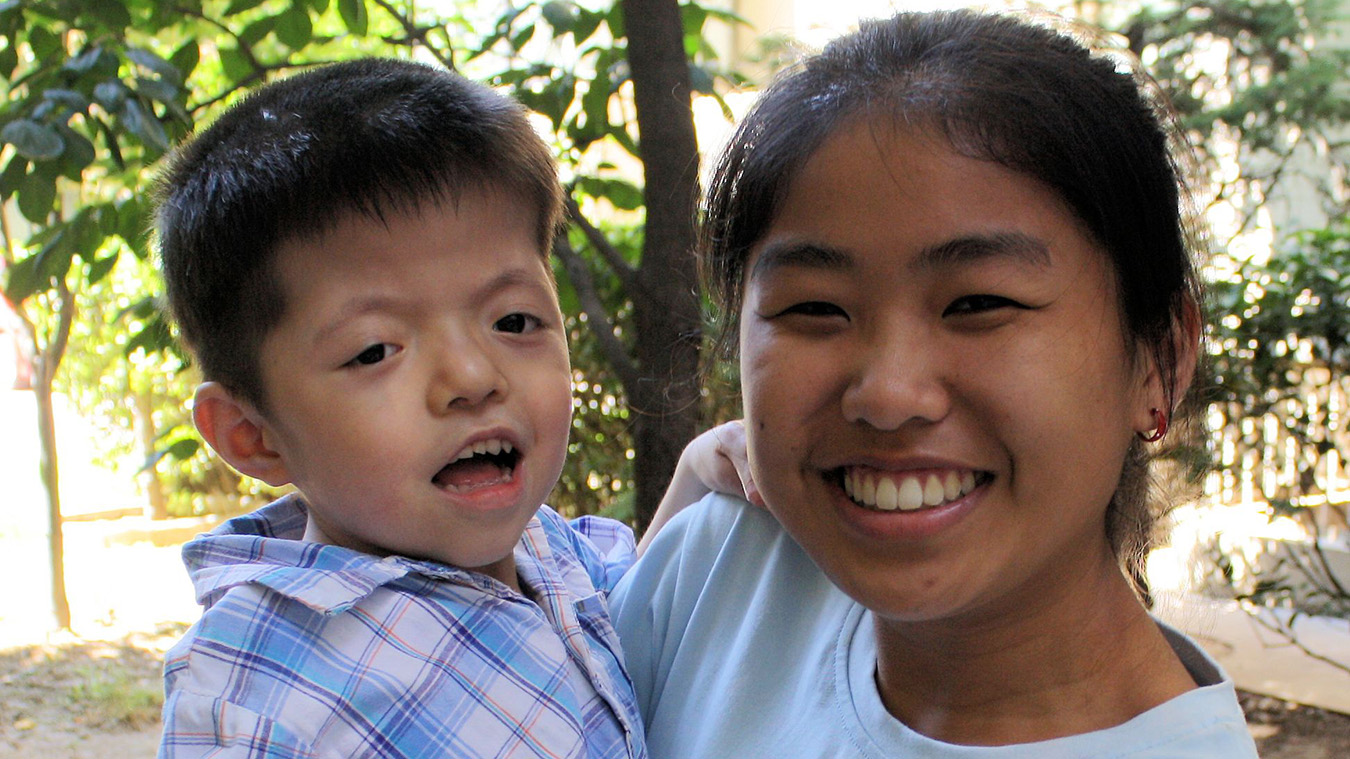 “One child we nicknamed “Scooter” had a cute little smile and chubby cheeks and reminded me of pictures of me when I was little. Another boy who was called “Er Pang” (Second Fat) reminded me of a nickname I had at my orphanage. One of the few stories I know from my early life in China is that the nannies nicknamed me “Pang DiZhu” (Fat Landlord) because I was not shy about demanding food and attention. With each child I met, my own beginnings in China came into sharper focus. I did not face the challenges many of these children face, but I felt a deep connection to our shared beginnings as Chinese orphans. I went on this trip thinking that I was going to be helping the children, but it turns out that they were helping me to realize that being Chinese is an integral and undeniable part of who I am.”

“I spent much of my time with LongWei. Every morning I would walk down the hallway to his room, and he would be waiting by the gate. The moment he saw me he would start jumping up and down screaming “Jiejie! Jiejie!” and run down the hall to meet me. He led me around the China Care Home and always stopped to look back to see if I was following him. One day LongWei came in wearing a small version of the volunteer shirts that we were required to wear. He ran over to me saying, “Jiejie, womenyiyang” (“sister, we’re the same”).”

“If I were asked to do that art project self-portrait again, I would not draw a fortune cookie. I would draw fireworks. Fireworks were invented in China and mark the celebrations of the Chinese New Year and Chinese Labor Day (my birthday). But America has made fireworks distinctly its own. Fireworks are about celebration, coming together with family and friends, and commemorating our history. Like me, fireworks are one hundred percent Chinese and one hundred percent American. My new self-portrait would be colorful fireworks, marking their own path across the sky.”

A Decade of Love

How a US Filmmaker Started a Charity to Improve the Care of Orphans in Chin...
Scroll to top