greeting each with a warm hug. “Hello, Binbin,” she says, as a child runs into her arms, “you had fun drawing yesterday. Do you want to do that again today?” “Hi, Zhilan, You had a headache when you went home. Are you feeling better today?” Lin Lin teaches in OneSky’s orphanage preschool in her home town of Shenyang, the capital of Liaoning Province. For Lin Lin, who has wanted to be a teacher since she was a little girl, it’s a wonderful job with days full of typical preschool fare: reading, writing, drawing, snack time, recess, singing, dancing, lunch, clean-up, a trip outdoors, and projects. But it’s also a special job because OneSky’s preschools emphasize emotional development as well as schoolwork. That means that in addition to paying attention to how everybody is doing on a math lesson, Lin Lin also watches very carefully to see how the withdrawn child is faring, or the angry child, or the little one sitting silently at a table, trying to hold back tears. 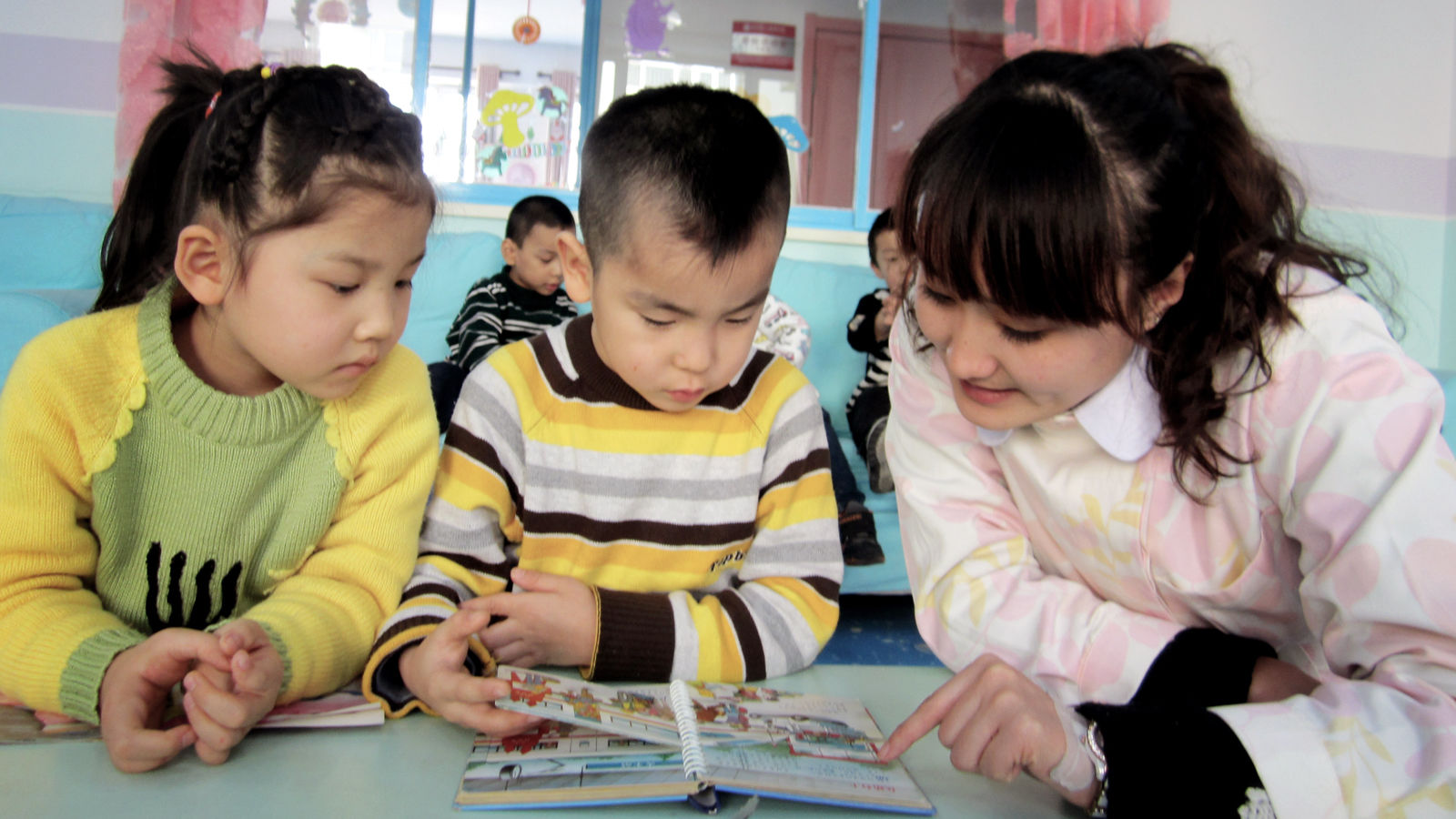 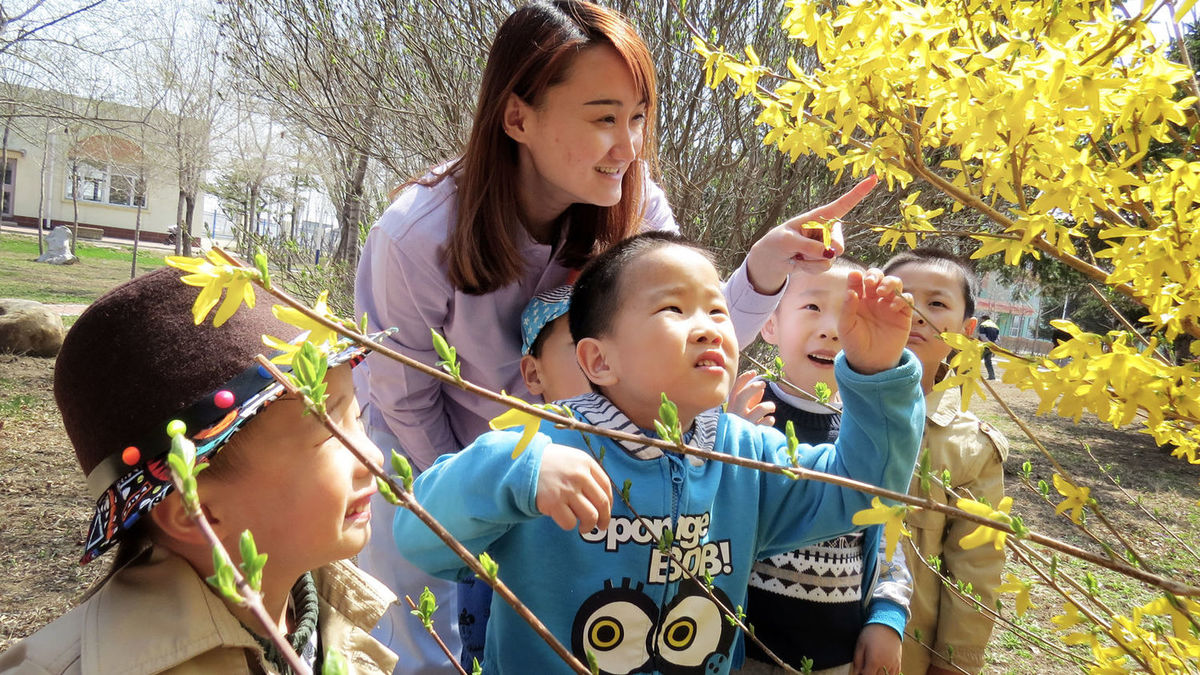 Lin Lin, who studied child psychology and earned a teacher’s certificate in college, found OneSky’s training to be a revelation. For example, OneSky’s trainers stress that children learn best by exploring, observing and touching the world around them rather than just sitting at a desk. They also stress that children don’t need the latest, fanciest toys: recycled materials can be transformed into children’s art and playthings. Cardboard boxes can be turned into doll houses, empty plastic cartons into flowerpots for seedlings. 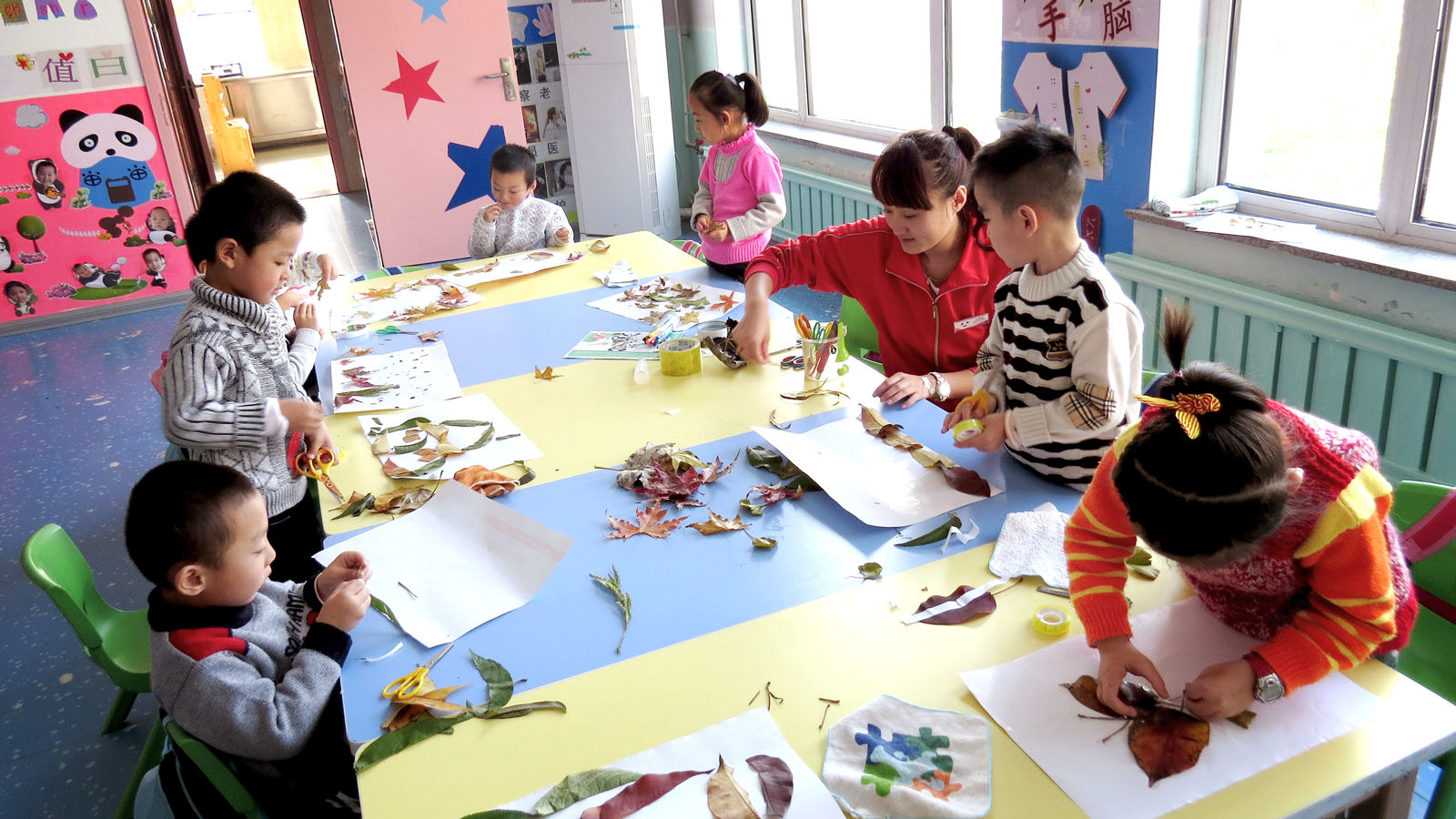 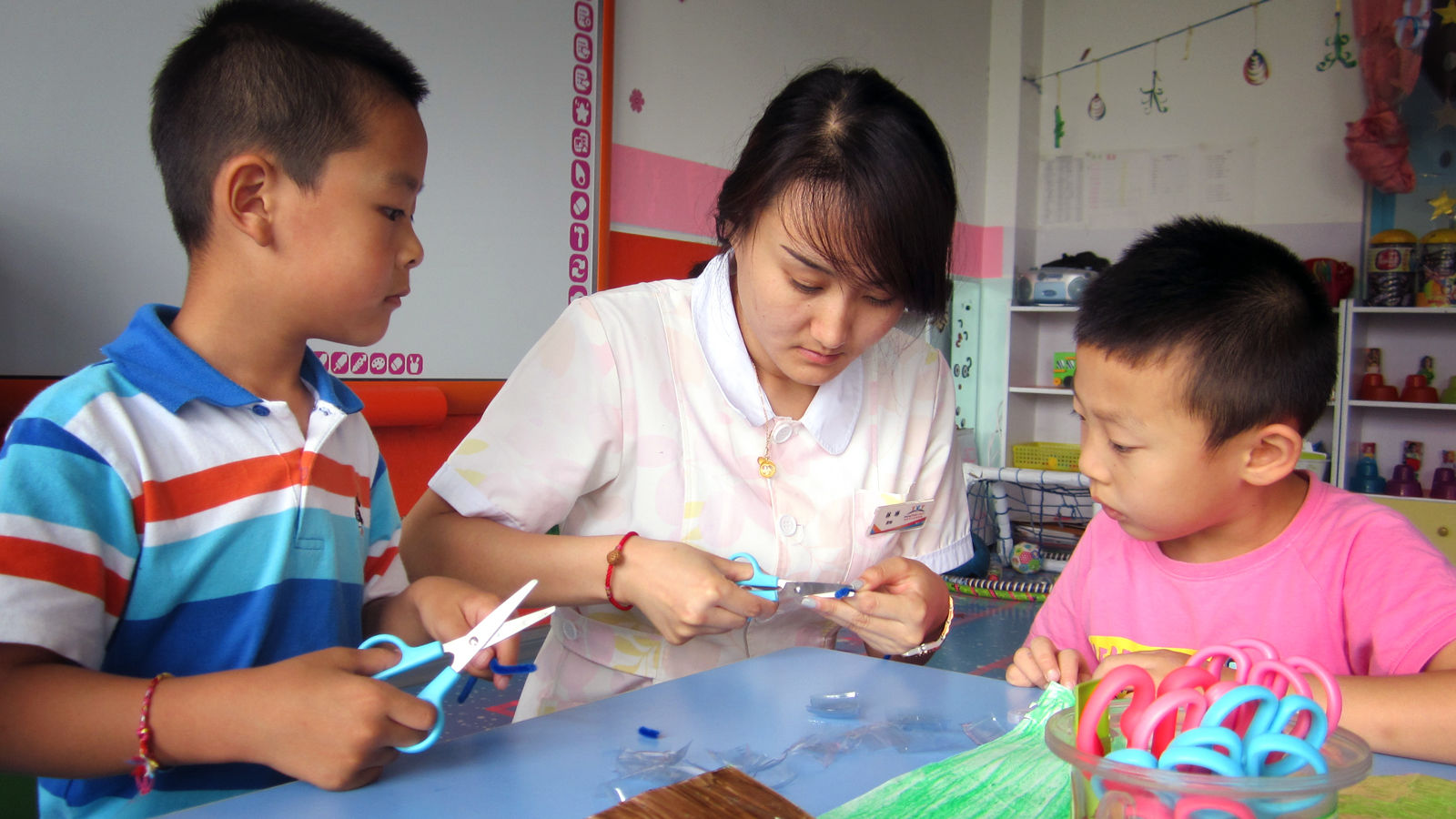 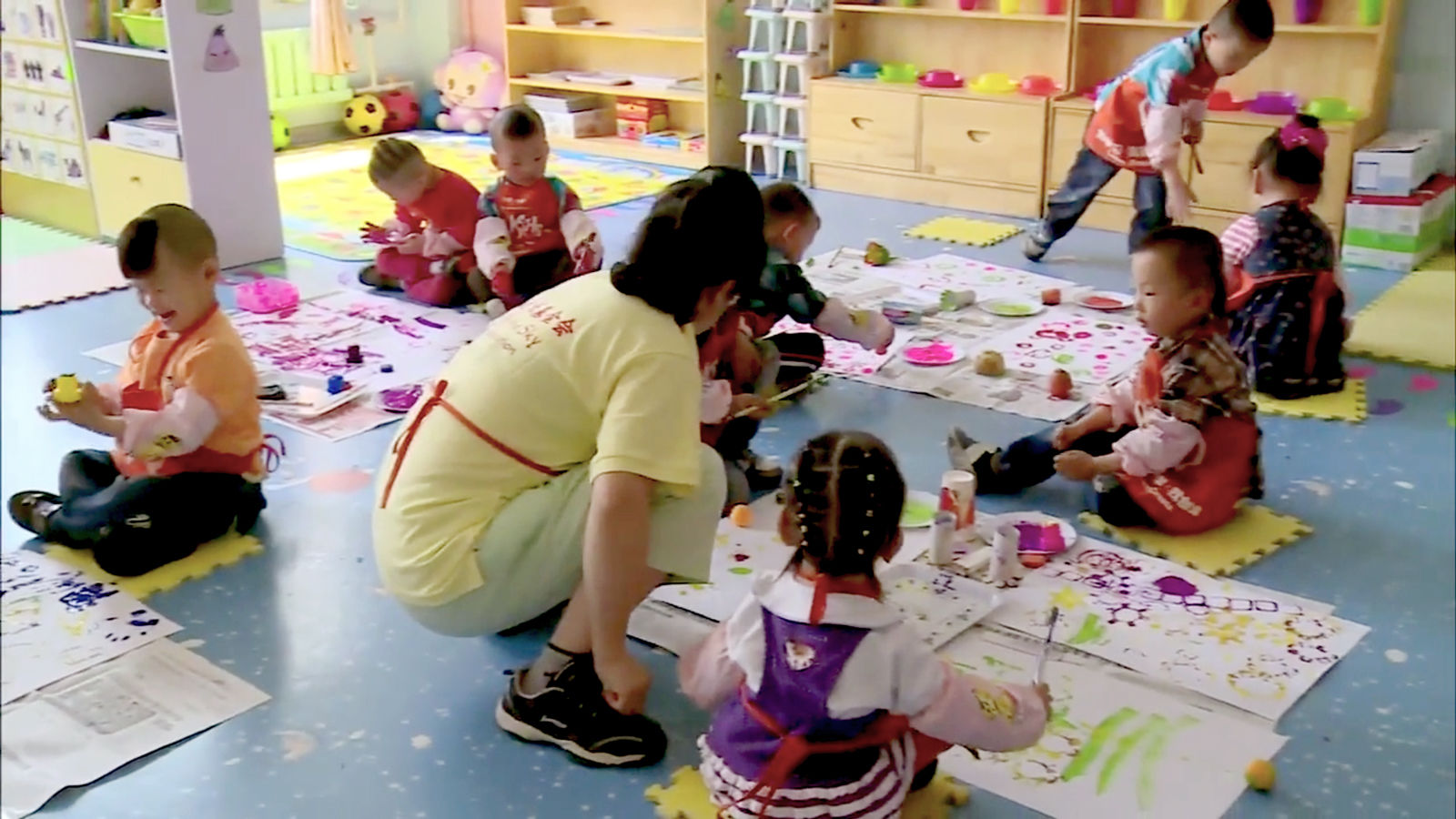 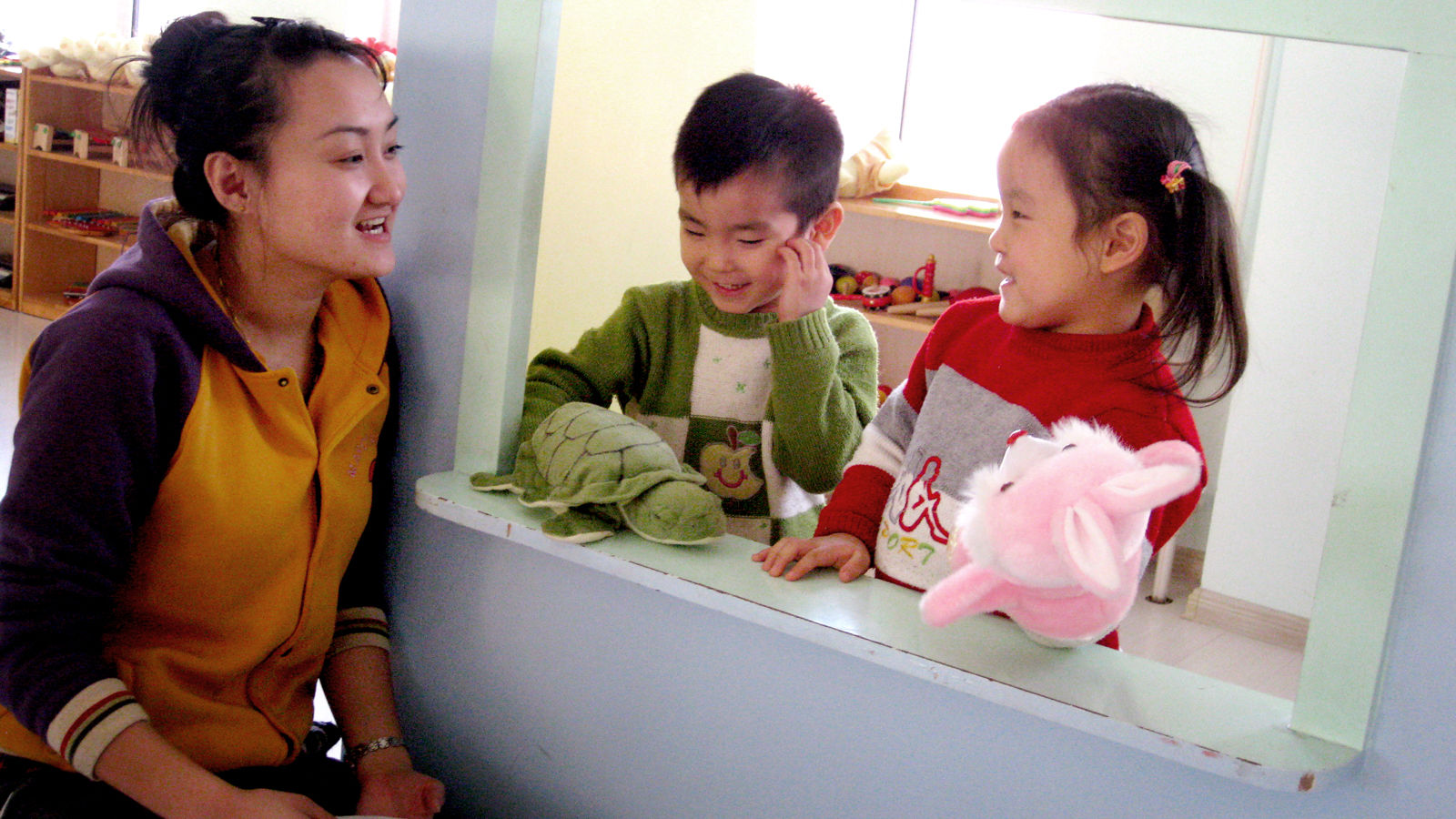 Though Lin Lin now loves her job, her first days as a teacher weren’t easy. “I held a boy’s hands and wanted to communicate with him,” she recalls. “But he avoided me.” After seeking advice from a more experienced teacher, Lin Lin realized she had to be more patient–she needed to observe the young boy very closely and talk with him gently. She tried again, realizing how frightened he was. She knelt down to his level and she just hung out with him for awhile until he began to feel safe.

“I realized he lacked confidence,” she says, “and that’s why he cried instead of trying.” So she began to praise him for every bit of progress he made, no matter how tiny. “I told him stories about brave people conquering challenges, and that seemed to help a lot.” Gradually, he became braver. Now he is actually outgoing! 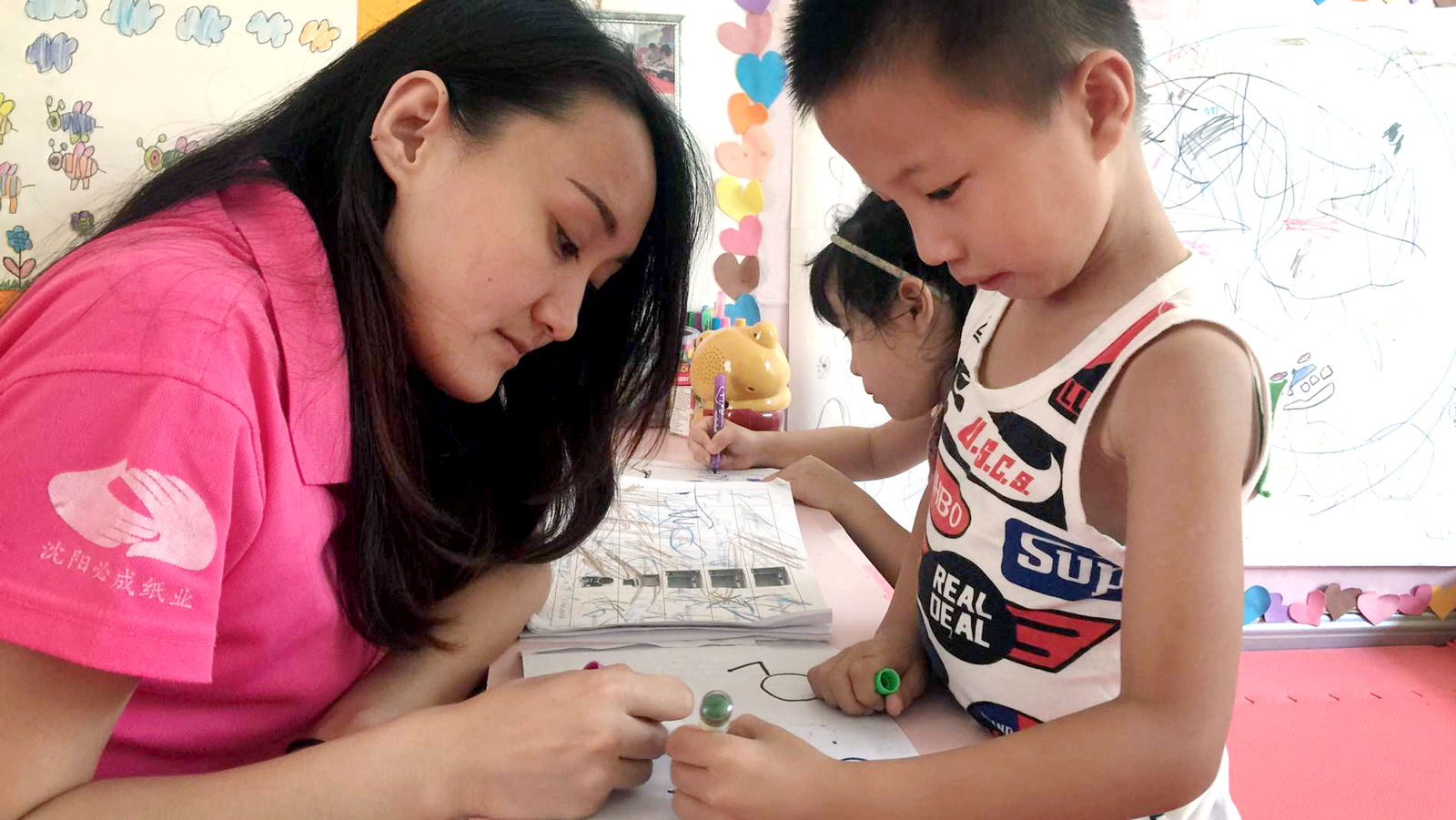 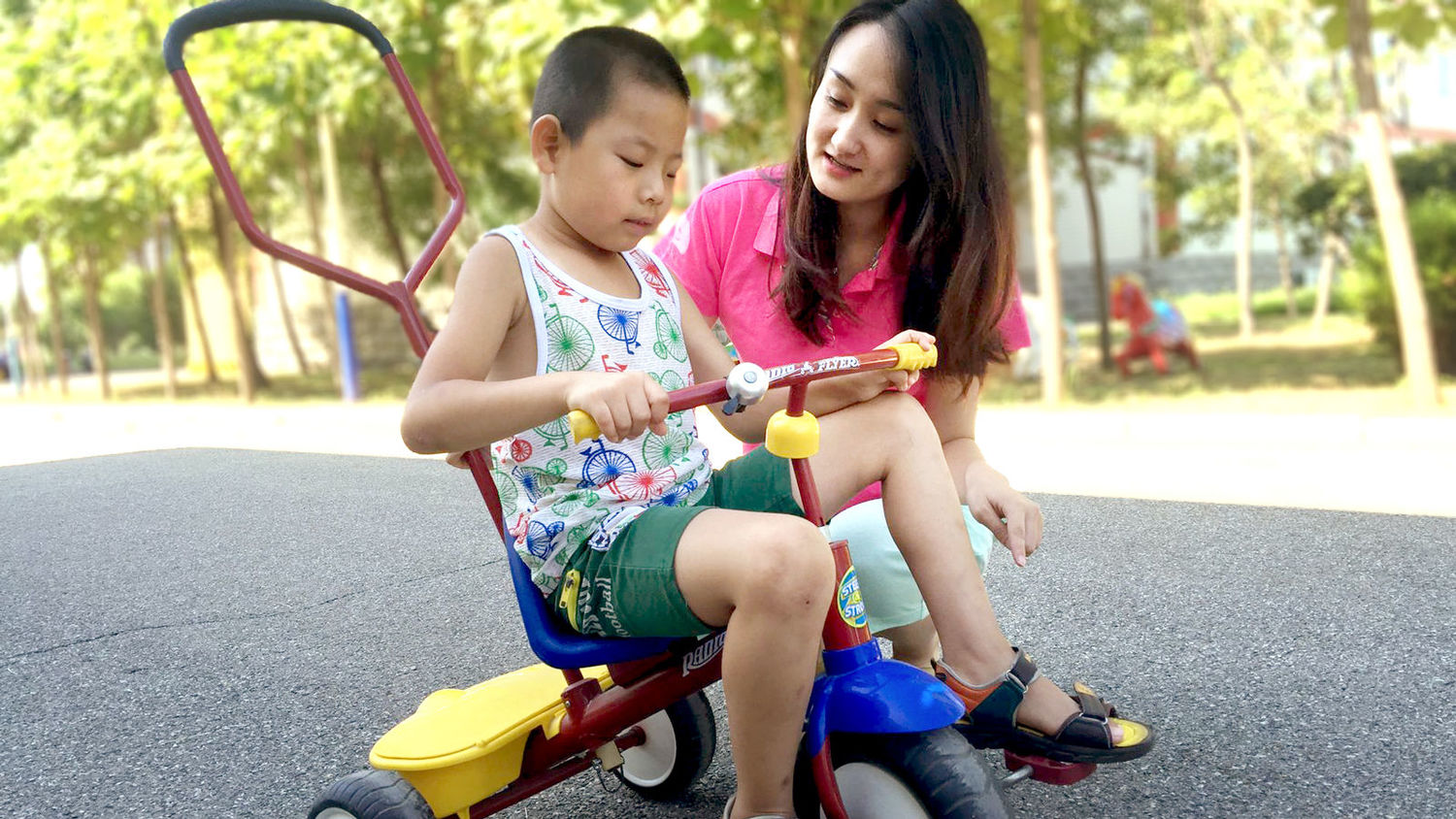 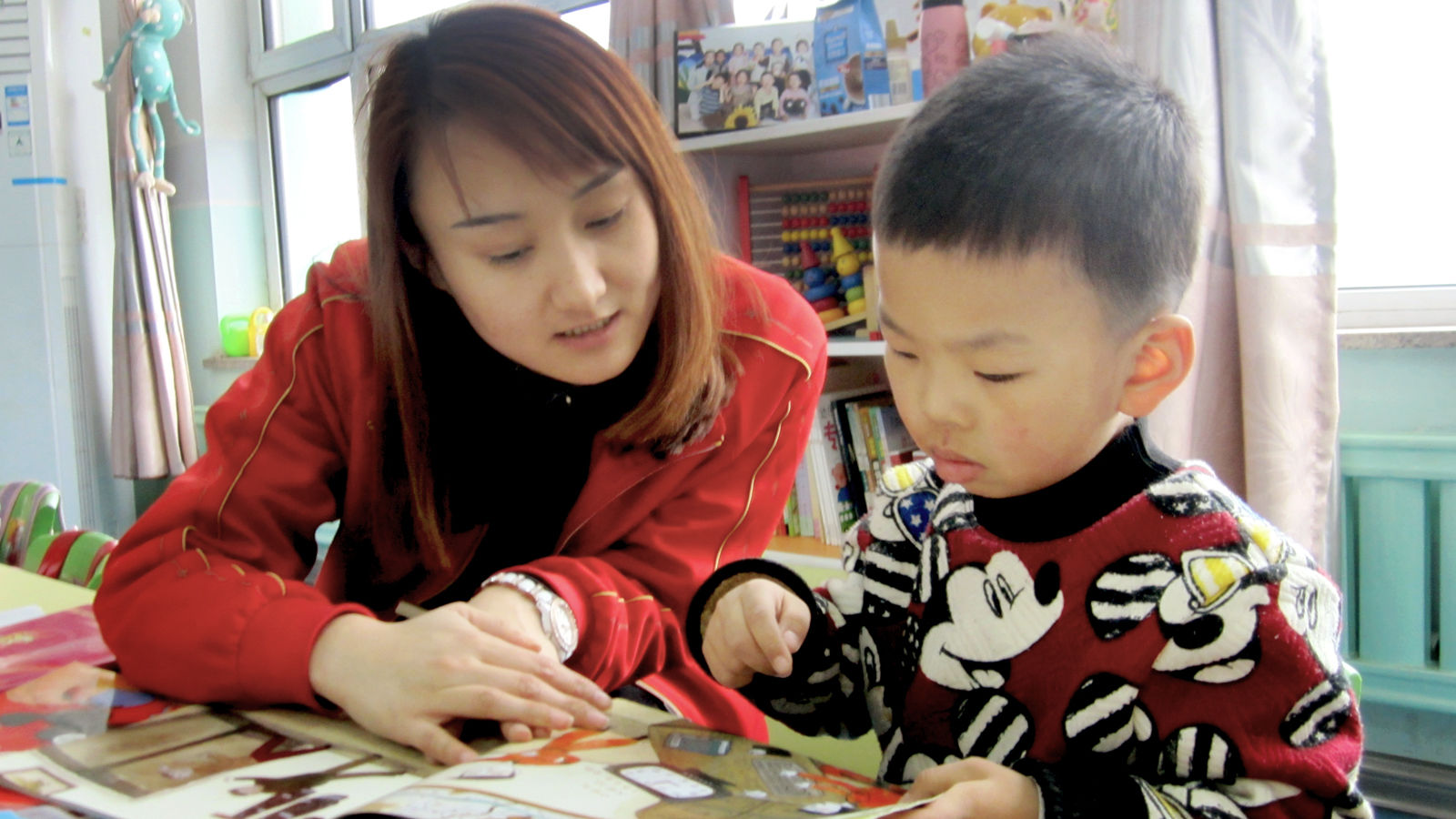 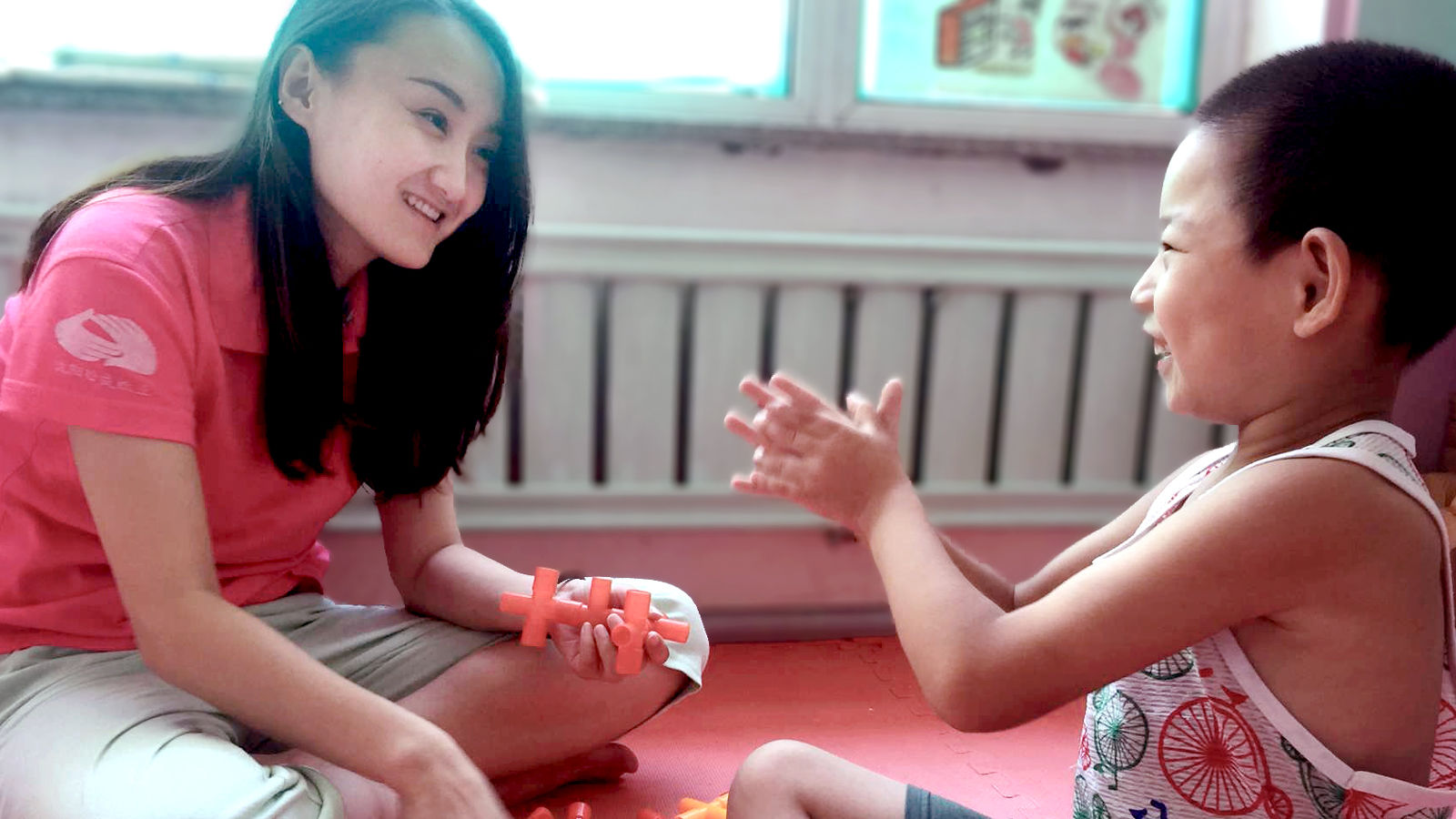 A little girl with Cerebral Palsy seemed to have no attention span—even during art work, which most of the children enjoy. Lin Lin watched the little girl intently, trying to figure out what was wrong. She realized that the girl had a hard time getting a firm grip on the pens and brushes. No wonder she gave up. Lin Lin helped her hold the brush, guiding her hand so she could make a mark on the paper. With help, she gradually gained strength to do more difficult lines. Before long, she learned to draw shapes. Soon she was adding color and detail to her paintings. Lin Lin meets frequently with other teachers to share challenges and solutions, brainstorm about fresh activities and new ideas, and figure out what is working and what isn’t. Such meetings also give all the teachers a chance to air their own feelings, whether of success or frustration. “I now know many colleagues with shared interests and dreams,” says Lin Lin. “They are like treasures to me.”

Even after eight years of teaching at the Shenyang orphanage, “I am constantly learning, “she adds. “How can I lead this activity in a way that engages the children more? How can I reach the child who is too scared to join in?” She incorporates as much variety into her classes as she can—with field trips into nature, or to local attractions. At the end of each day, Lin Lin asks each child to share his or her happiest moment. Then she dismisses the class with, “See you tomorrow, you did such a good job today.” As the children leave the classroom, she whispers a special, personal word of encouragement to each one. 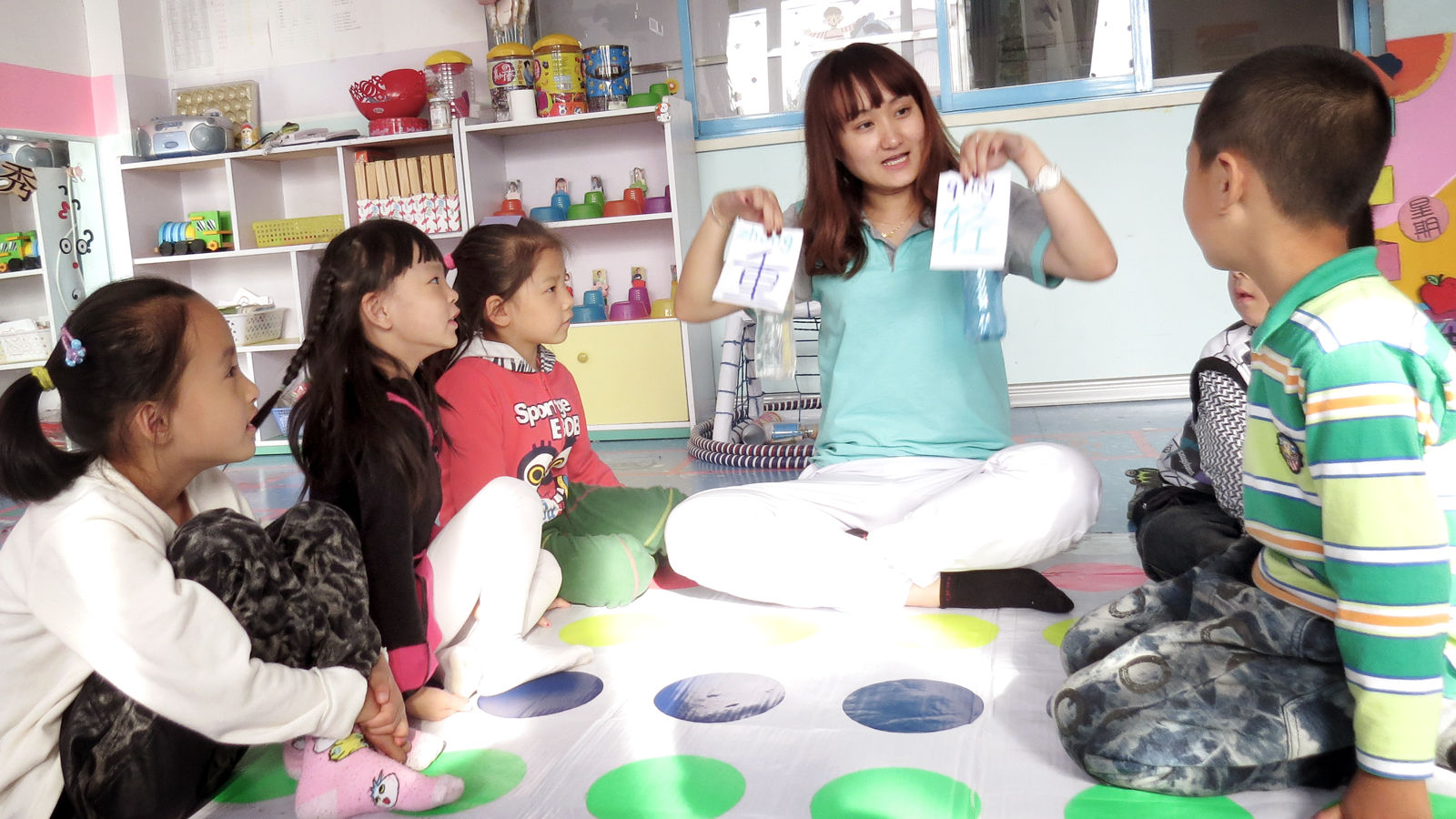 Soon the children in Lin Lin’s current class will move on to a community school. In her early years of teaching in the orphanage, Lin Lin worried that they wouldn’t do as well as children growing up in families. But after seeing a number of the children thrive in community schools, Lin Lin is confident that the children she teaches can succeed in schools just as well, “I am so proud of their progress,” she says.

Half the Sky 2016 Gala Fundraising Dinner

Half the Sky 2016 Gala Fundraising Dinner Invitation
Scroll to top