It is Monday afternoon here in China.

As I write this, the entire country just held three minutes of silence, the start of a three-day period of national mourning that began at 2:28 p.m., exactly one week after the massive quake. Flags flew at half-staff, the people wore white flowers and, heads bowed, held hands. 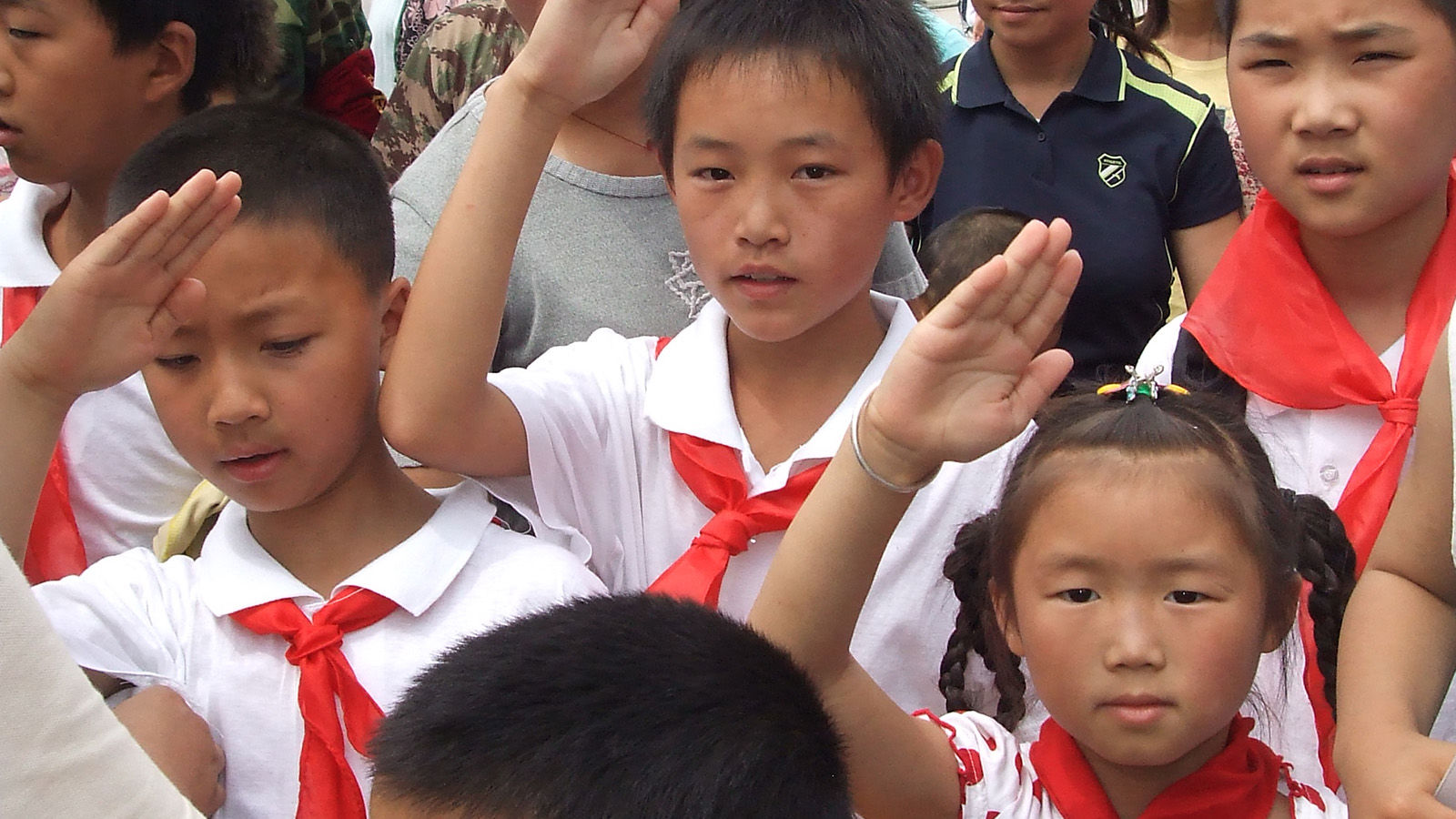 Across the country, horns and sirens wailed in grief. 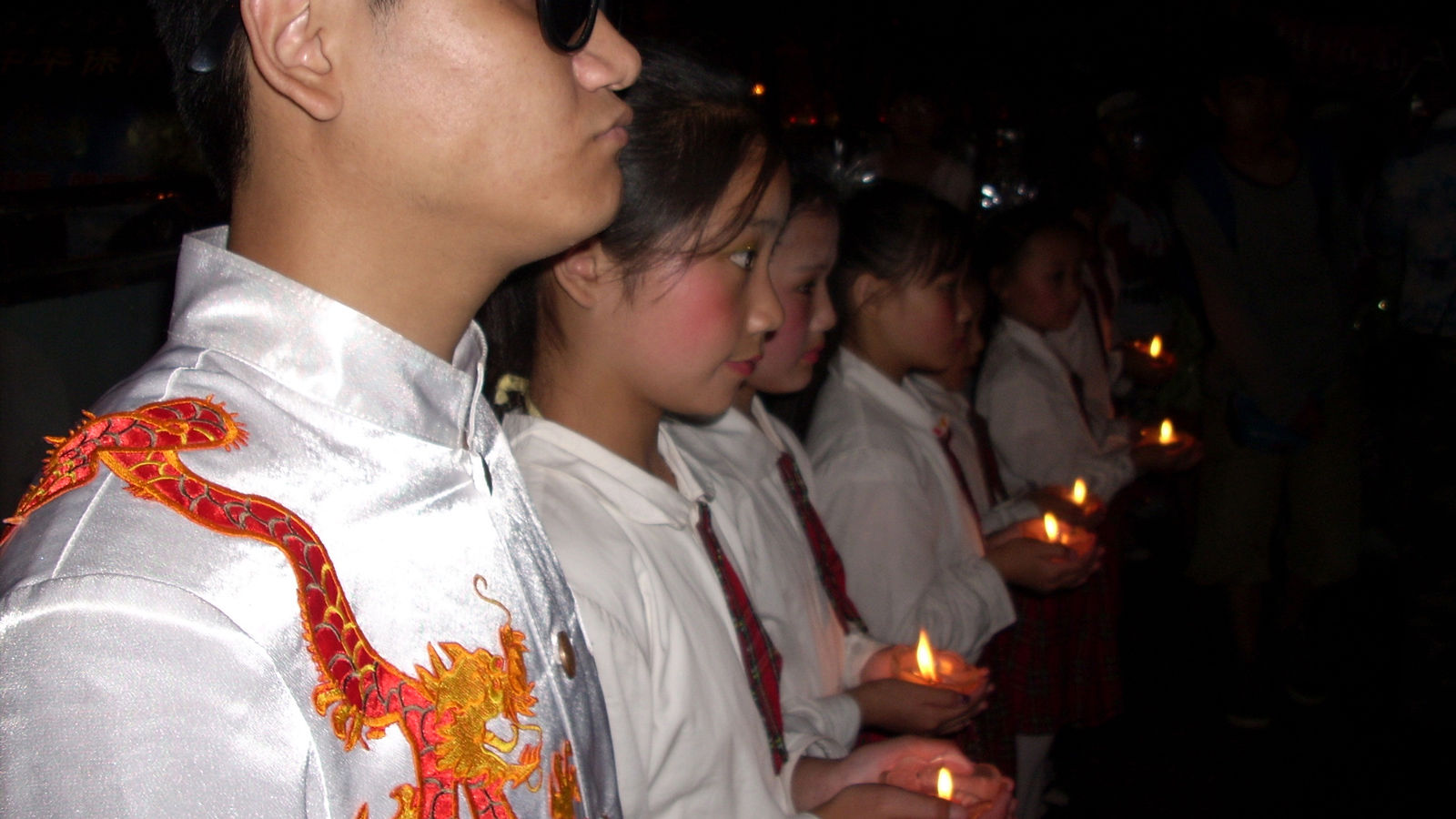 After those three silent minutes, the people of Sichuan wailed not only in grief but in defiance as they called out “Rebuild! Rebuild!”  They are also taking care, amidst destruction and death, to nurture new life.

The military police made a special effort to bring the youngest refugee at the Qiangyang Sports Center in Chengdu and her very young mother down to the camp from their home near the epicenter. The baby was only 11 days old when her daddy perished in the earthquake. Some new babies have been given names like “Li Zhen” — Earthquake — and “Born in a Tent” and “Long March.” For them and for all of the children who survived, Sichuan will rebuild. 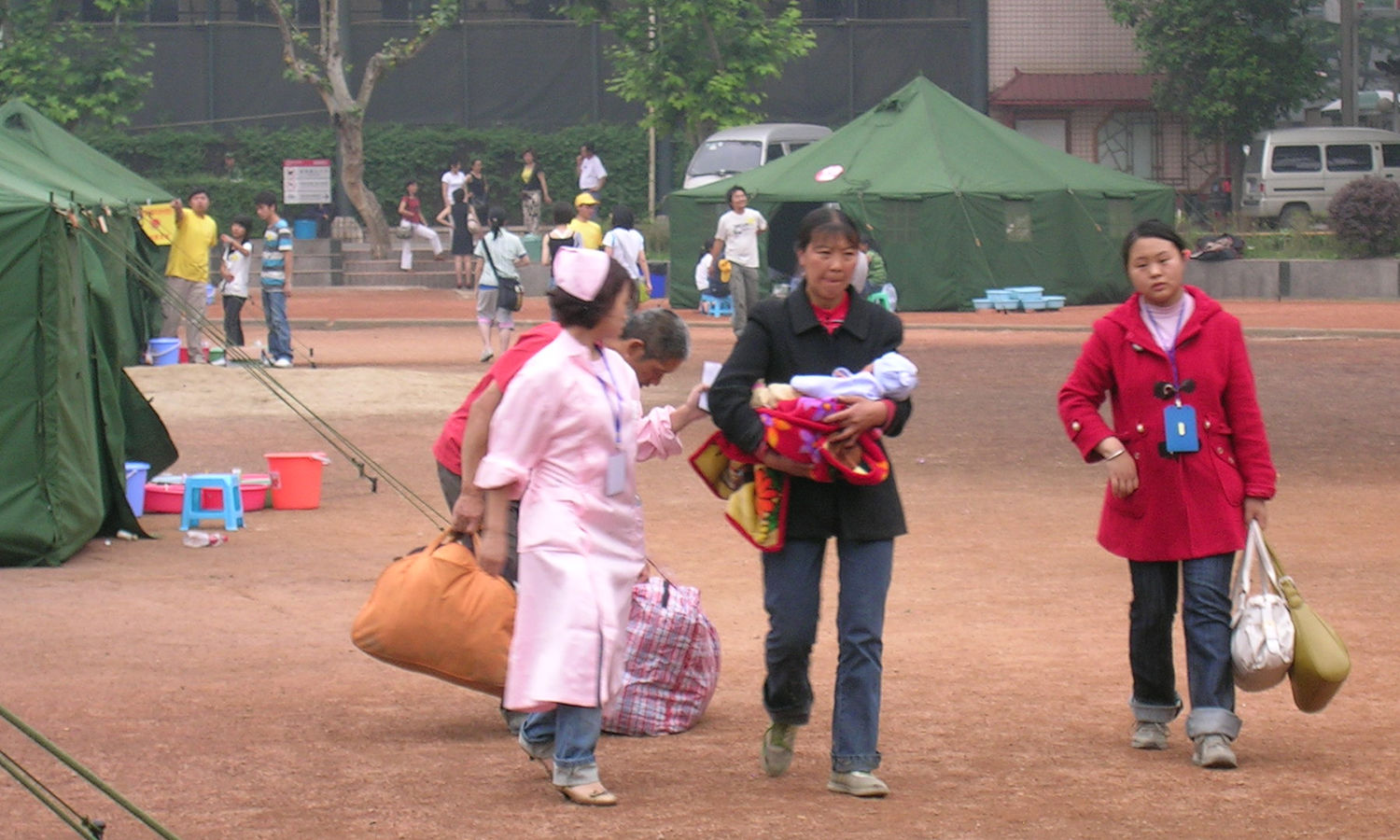 Perhaps today’s most heartbreaking story is about some of the 70 injured children who’d been carried down from the affected areas to Chengdu’s Huaxi Hospital. Most of the children were reunited with parents or relatives; some were even well enough to leave the hospital after treatment. But a few children who remained alone and unclaimed were required to sign their own consent forms so the doctors could amputate their limbs to save their lives. 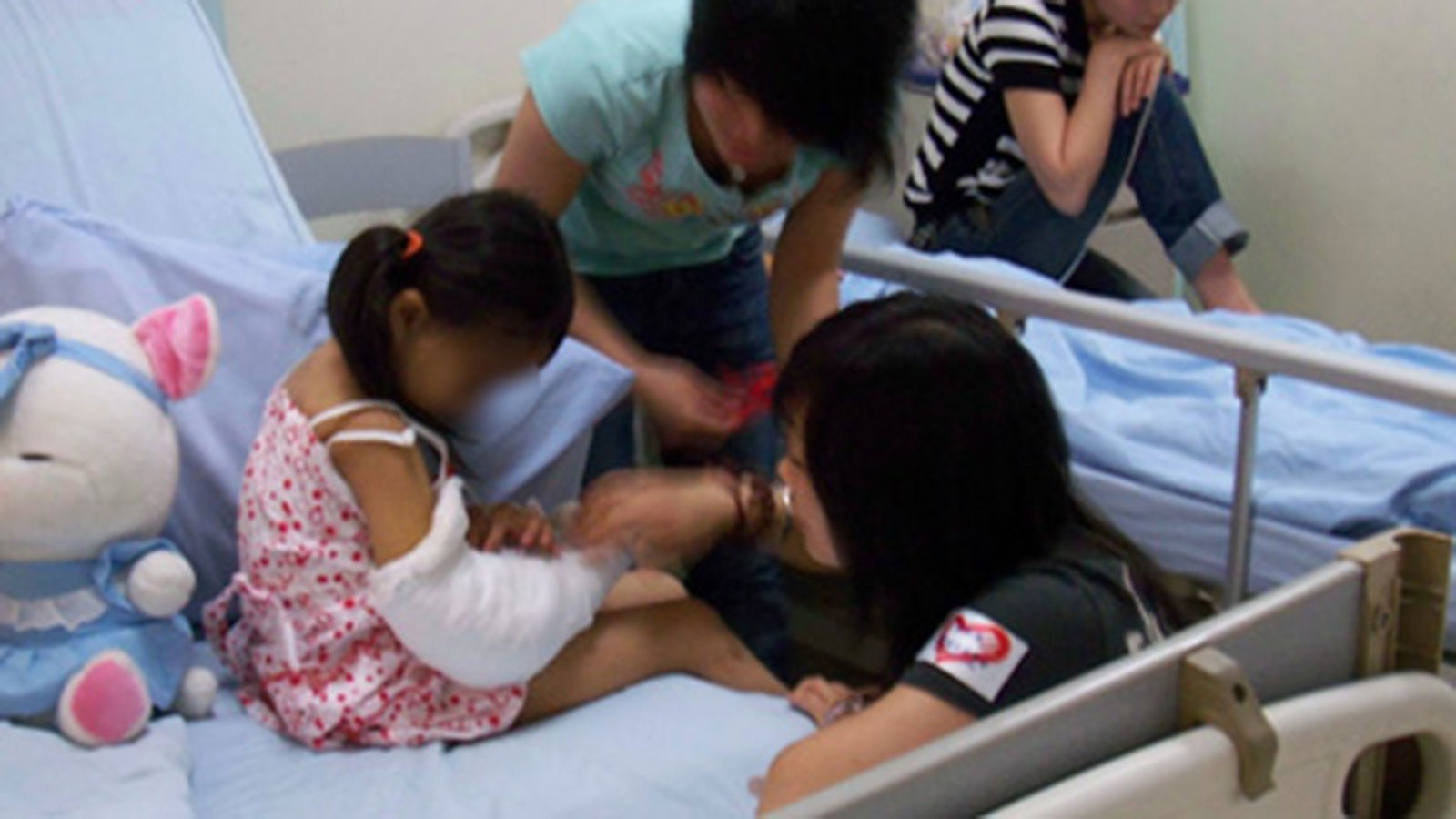 The city of Mianyang has become a major refugee center where 20,000 people, including an estimated 1,700 young children, descended on foot from the devastated mountain towns that surround it to Jiuzhou Stadium. 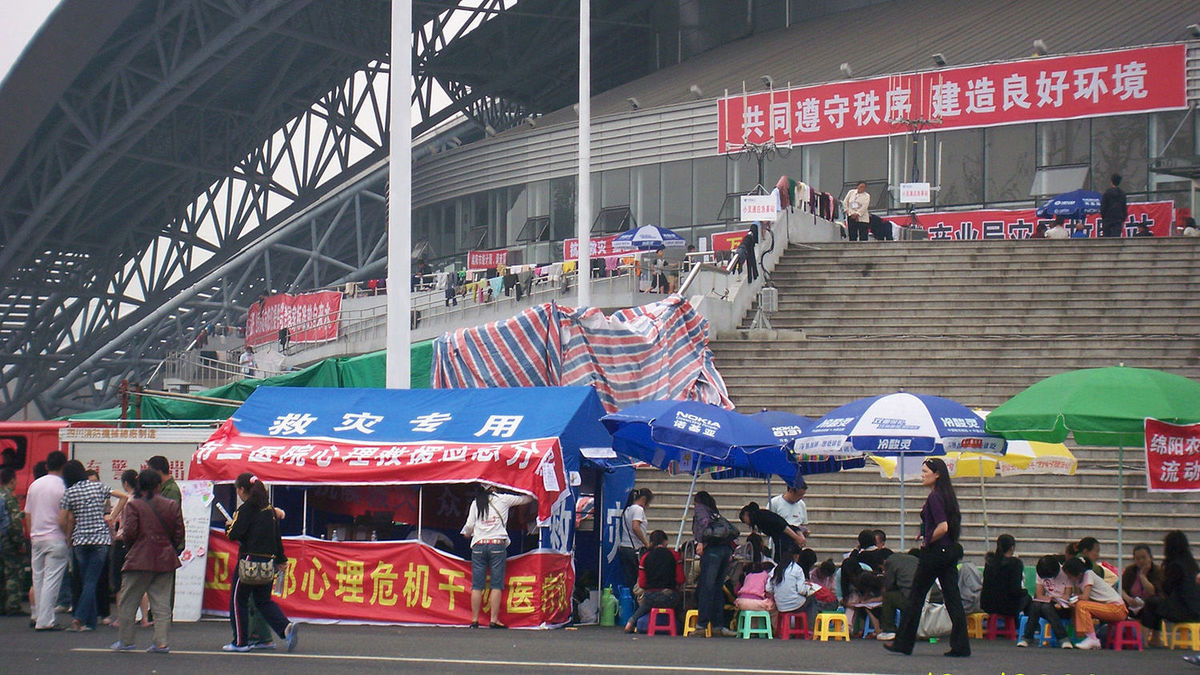 The children’s most common signs of trauma include insomnia, nightmares, tearfulness, indifference, and a tendency to blame themselves for an act of nature. 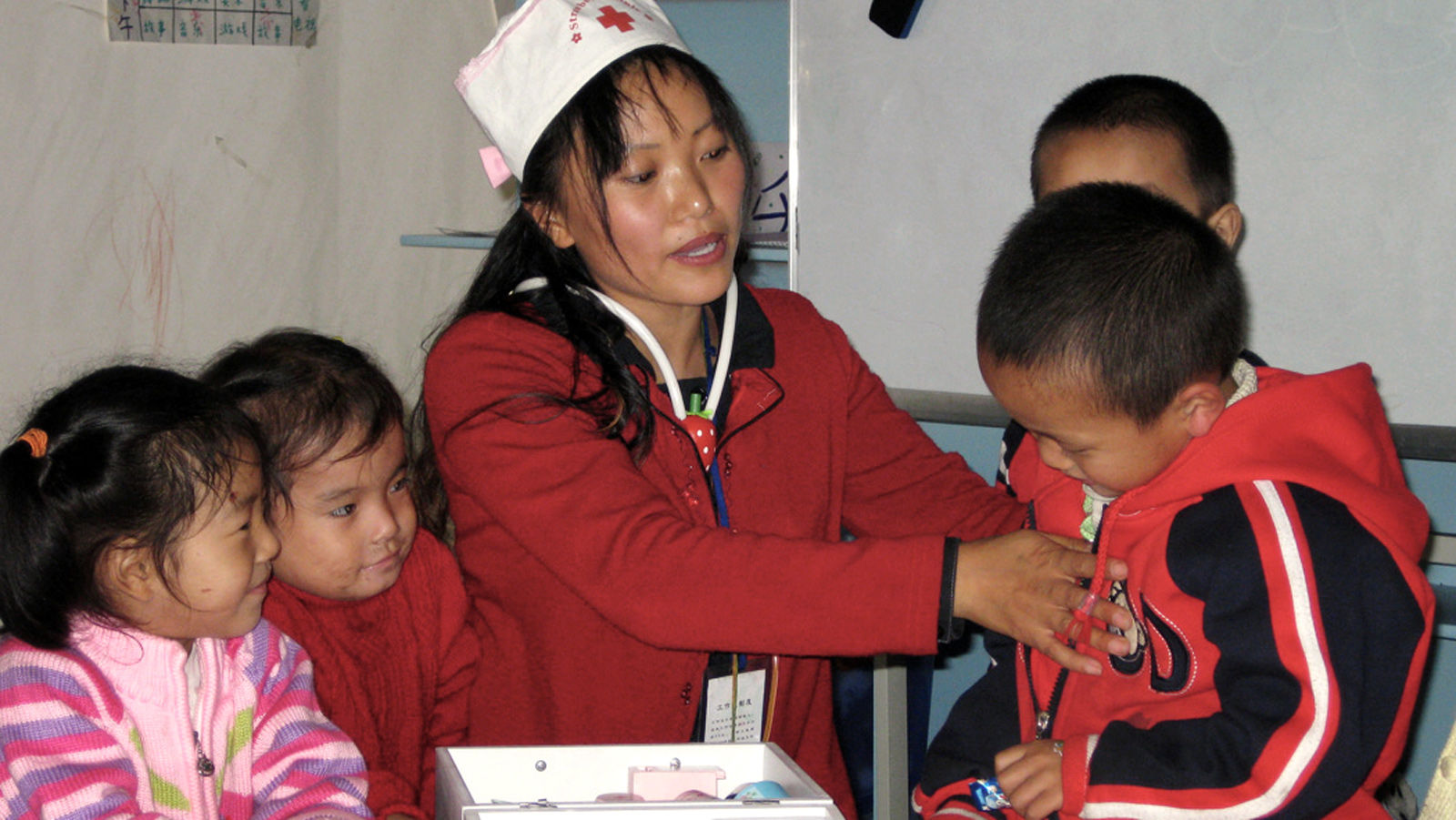 One small child who’d lost his parents explains that after the earthquake come aftershocks, and then comes the epidemic. 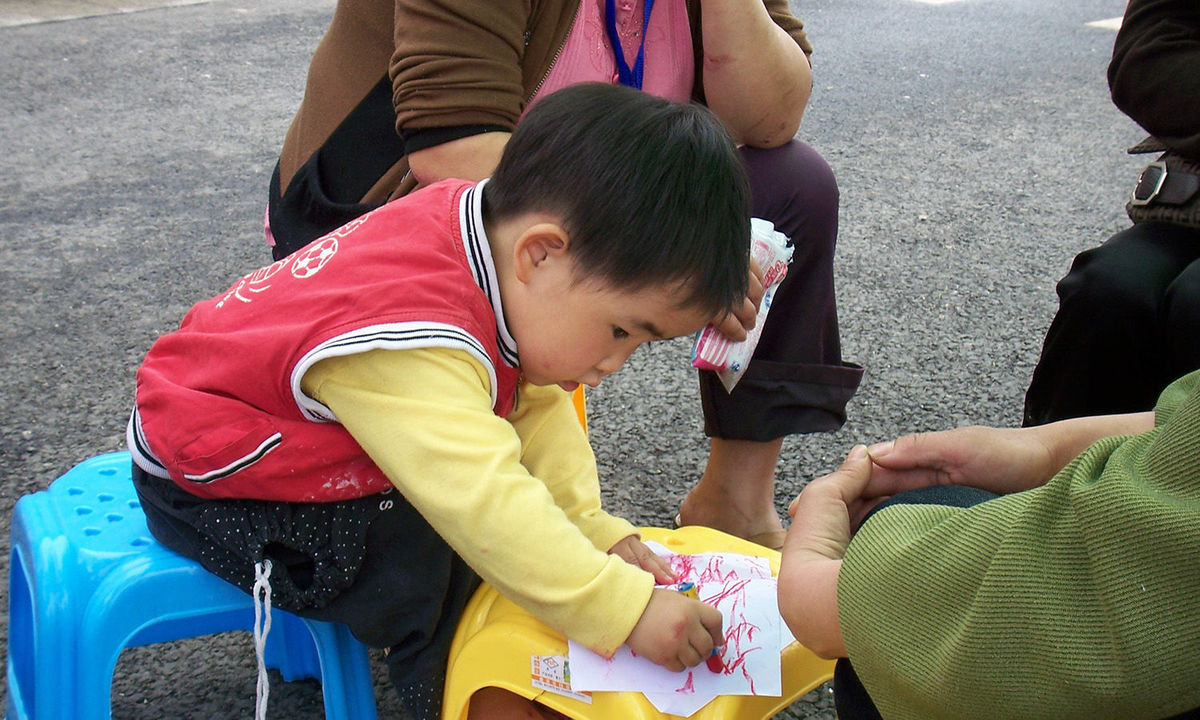 “Epidemic means you die if you do not wash hands before and after a meal and an earthquake happens when you talk loudly.” When asked if his voice was soft enough to prevent another earthquake, he said, “I don’t know.” 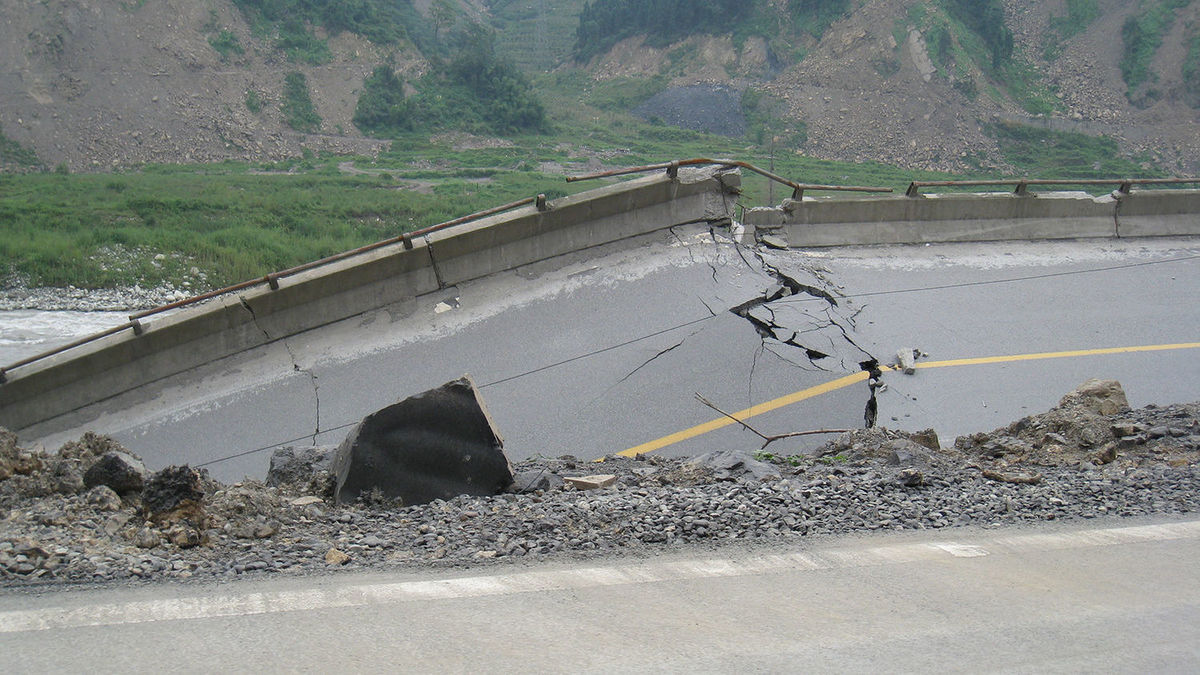 Yesterday morning, two weeks after the quake, I arrived in Chengdu and was invited by the Ministry of Civil Affairs to visit some of the orphanages and hardest-hit sites very close to the epicenter. 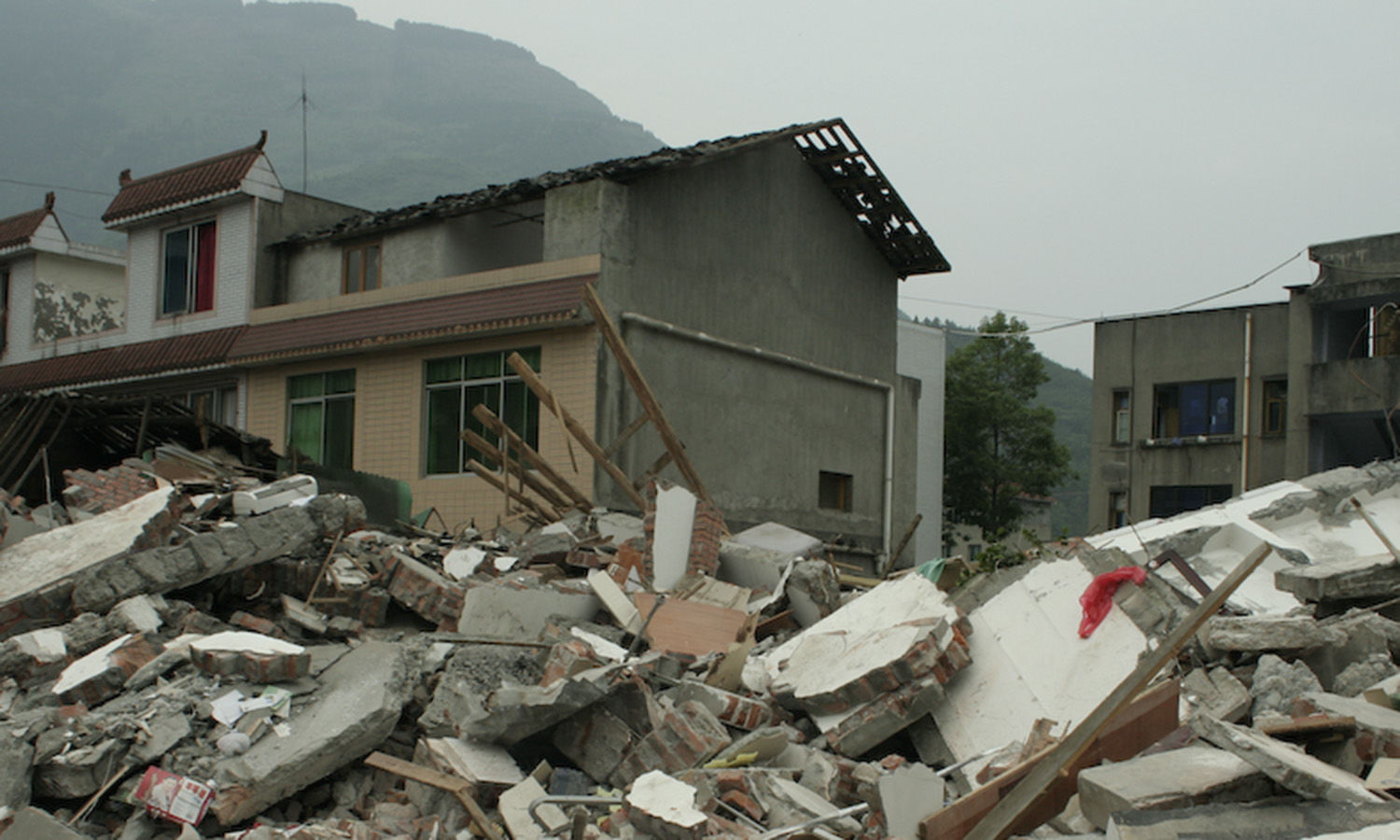 It was a painful day, but I was also heartened to see how quickly the government has come in and tried to take care of the basics – building thousands of temporary shelters and schools – and how the people have come together to help each other. A sign in one of the tent cities read, “The earthquake has destroyed our homes but it can’t break our spirit.” 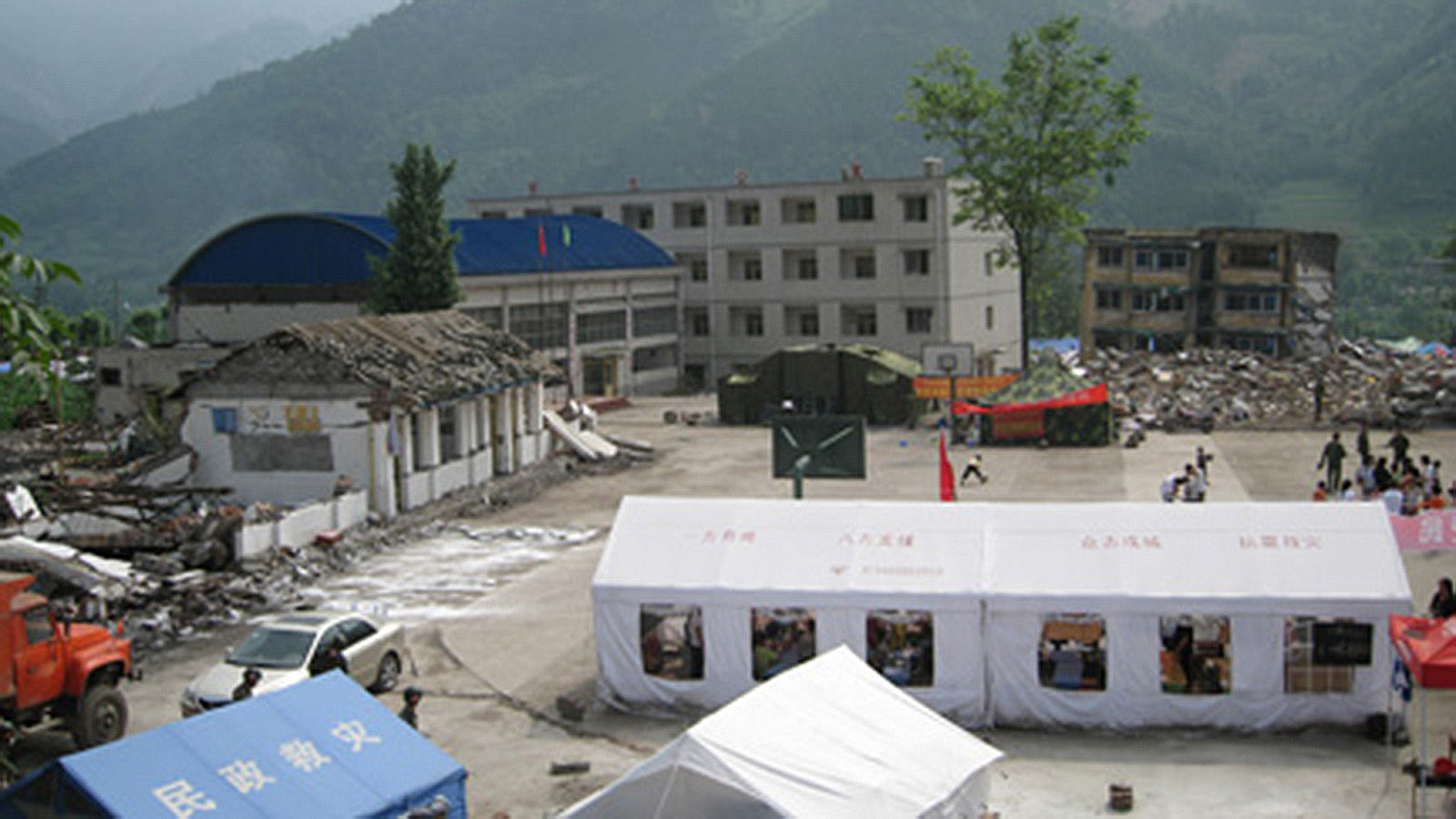 We visited the orphanage in Zitong. A tiny boy ran into my arms. The director told me that every time the institution gate opened he hurried to it and called “baba,”“mama,” the only words he knew. He clung to me, fearful and confused, until it was time for us to leave.

A couple of hours later, we arrived in the mountain town of Hongbai. The whole town was still in shock. One 8-year-old boy stood in front of the pile of rubble that had once been his school and explained that he was the last student to have been pulled out alive. In the first days after the quake, he couldn’t return to the pile of debris that had once been his three-story school, but with the help of a volunteer teacher from his tent school, he has visited the site several times and now is not afraid when he comes back. When the earth shook, he was one of the obedient children sitting with arms crossed at their desks—some naughty boys were still outside, safe on the playground. For ten frantic minutes, trapped between a piece of concrete and brick on the second floor, he waited. His cries couldn’t be heard over the wailing adults, but finally when the crowd outside the collapsing school quieted down they heard him and came to rescue him with their bare hands. 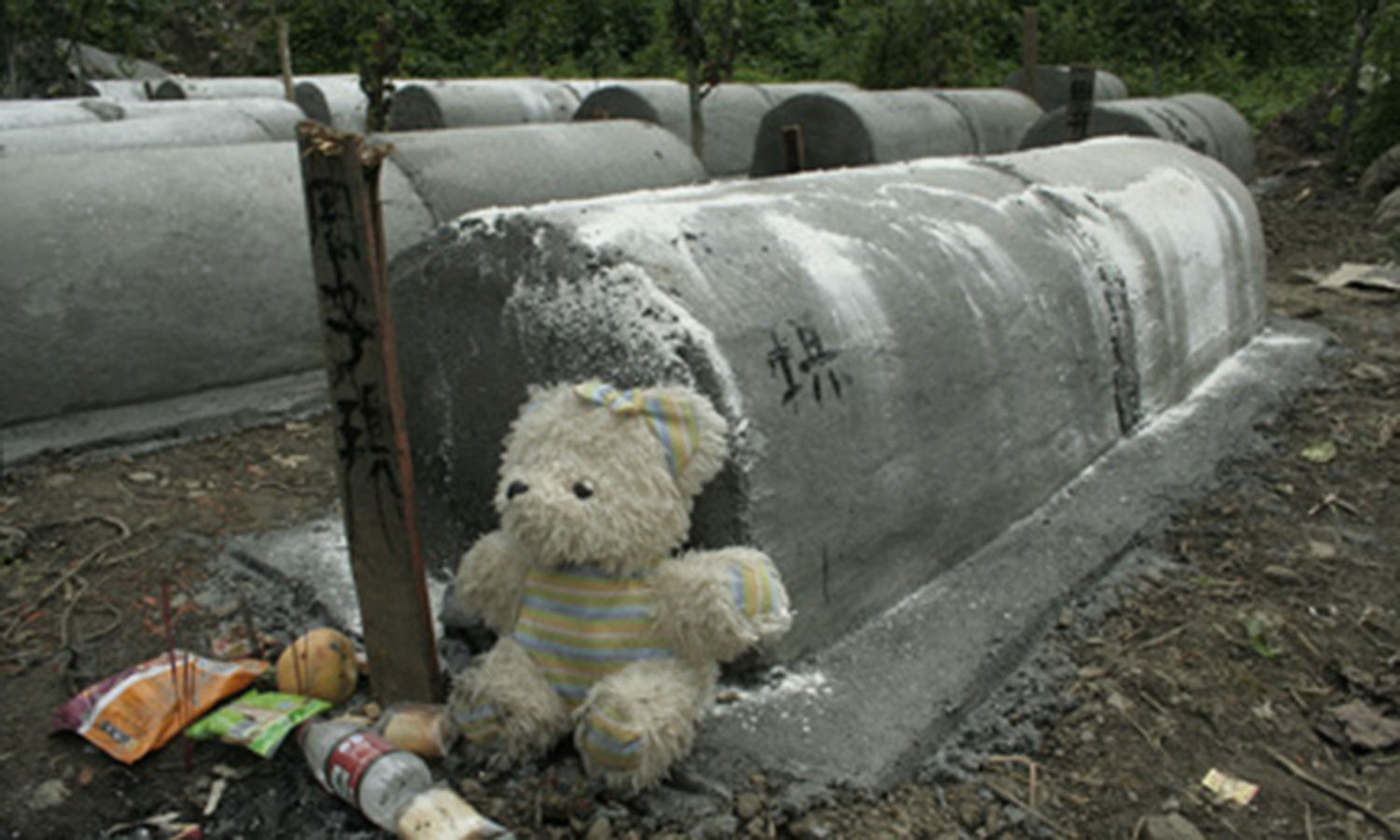 At a four-tiered hillside cemetery near the epicenter with hundreds of children’s freshly made graves, parents have laid things that their children once loved—a pink backpack, wrapped candy, spicy Sichuan snacks, a big teddy bear and a stuffed monkey. A weeping dad injured in the quake, his arm still in a sling, burned paper money and incense and apologized to his child. “I am so sorry. This is the first time I could come. I hope you don’t mind,” while his wife wailed the lament of every parent who has wished that they could have saved the life of the child even at the cost of their own: “Mommy is here for you. How could you go before us? Please wait for us. It was heartbreaking to witness such grief. I am even more anxious and determined to help in the only truly meaningful way we can. As soon as we receive the ministry’s permission, we will begin training caregivers, foster parents, shelter workers and volunteers of all backgrounds to work with newly orphaned and displaced children.

The World Shook-3
Scroll to top