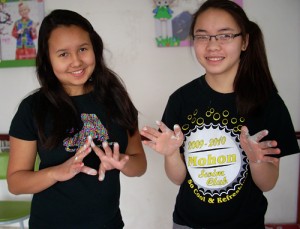 This experience has not been what I expected. I expected the orphanage to be very small with the kids staying in one room or something like that. But instead the kids are mostly free to roam on the floor they’re on. And the orphanage is pretty nice, although I have yet to use a “squattie” (toilet). I had no idea what to expect when it came to what kind of work we would be doing, and assumed that I would probably not like it because I usually don’t do too much manual labor. The work has been painting walls, tables, and chairs for the kids, which to my surprise I actually kind of liked, so it’s been a good experience.

Finally, the best surprise. I didn’t expect us to be interacting with the kids as much as we are. Instead, the kids just come up to us while we’re painting or building something. It’s been fun. 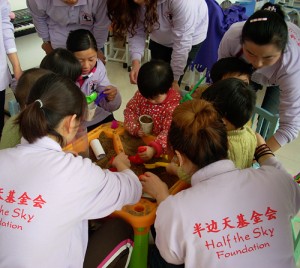 We finished our work at Changsha #1 SWI this afternoon as the sun came out in Changsha. I’ve been to Changsha several times and had never seen the sun. It must have been a good sign.

The children sang their good morning song in the main room as we finished our work and the caregivers, the “aunties,” planned to clean the painted rooms and put away the assembled toys while the children were taking their afternoon nap. When we get back to the orphanage in the morning, the Half the Sky facilities will be ready to go and there will be a party with the volunteers, the children and the staff.

We had a banquet this evening hosted by the director of Changsha #1 SWI. There was lots of singing and toasting and declarations of mutual respect and friendship between Changsha #1 SWI and Half the Sky. It was the perfect end to a perfect day full of hope and sunshine.

The staff at the facility has been working just as hard as we have through this whole operation. Thanks to their diligence, the common room where we’ve been working has been cleared of the debris and clutter our whirlwind produced. It’s a good thing, since this morning the area was suddenly overrun with children and caregivers.

The teachers have opened up a veritable arsenal of art supplies. This provides the kids with some hands-on creativity in the form of finger paints, sculpting clay, pastels, and even some miniature sandboxes. 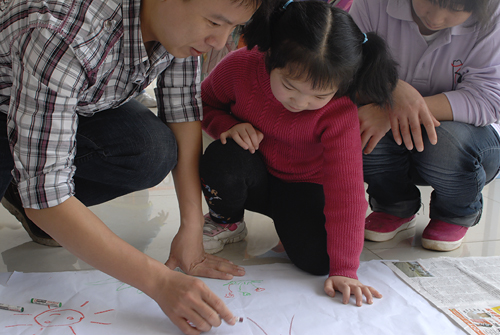 Maybe the children were a bit stir-crazy since we’ve occupied their biggest classroom for four days now. Or perhaps it’s just that the caretakers are excited to put their training to more use.

We take a moment to stand back and observe the frenzy, pleased to see all our freshly-painted chairs and tables being put to good use. One teacher takes advantage of a girl’s drawing of a tree, adding apples and counting on his fingers to help her practice counting. She mirrors him, smiling. Another instructor in the finger-paint section shows a small crowd how to mix two colors to make another.

We could watch this forever, but play time must end sometime. The caregivers soon chaperone the kids back to their classrooms — and their naps — with a few staying behind to straighten up in the aftermath of the little artists’ creative play. It was a terrific interlude and a good reminder of the reason we’re all here.

At this point everyone on the crew is getting along well, and we feel a bit like old friends. There’s only one day left in our time here, and we plan to put it to good use. 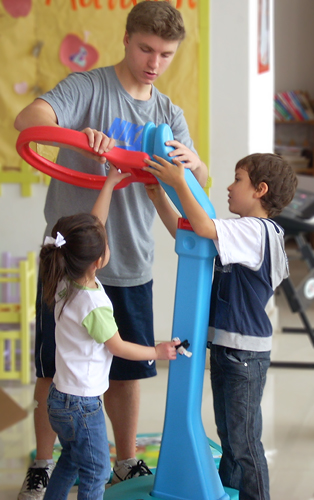 Today we just had to do some touch-ups with the paint on the walls and then we got to assemble some more toys. There were easels, wheel barrels, basketball hoops, and other small toys to assemble. When we finished, all the kids came out and we got to watch them play, and we got to hold the babies.

We got back to the hotel by about 2 p.m., so a bunch of us went to a park nearby. This was the first time we got to see some of Changsha. Our cab driver almost hit about a dozen people on the way to the park and was honking the horn the whole time. The park was one of the nice places we had seen in Changsha.

A bit later we went to the Half the Sky banquet where the director of the orphanage, the staff, and all of our group gathered in a big room. We had a big dinner, made a ton of toasts, there were some singing and dancing performances. We had a good time.

When we got back to the hotel a lot of the women went to get foot massages, so a bunch of the younger people went to Party World across the street for karaoke. We sung a bunch of songs, and some of the Chinese people that work for Half the Sky came with us and sang some Chinese songs, which was fun to hear.